Bendigo filly Gloves Are Off destined for better races 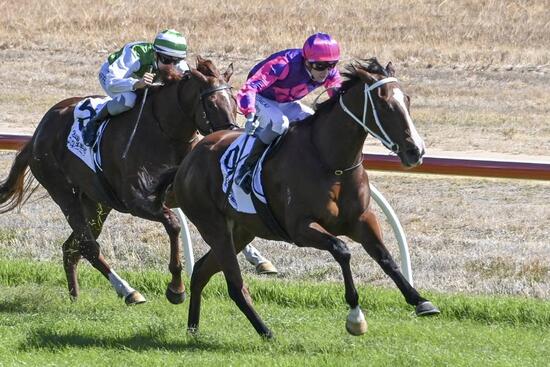 Bendigo trainer Kym Hann is confident his filly Gloves Are Off will develop into a smart sprinter.

The daughter of Toronado broke through for her first win at just her second career start at Warracknabeal on Saturday.

The three-year-old was backed into a short-priced favourite and she didn't let the punters down.

With Harry Coffey in the saddle, Gloves Are Off ($2.20) raced outside early leader Sharna Star ($12) before kicking clear at the top of the short Warracknabeal straight.

She went on to win by one-and-a-half lengths.

"She always showed plenty of promise on the track and in her trials and now she needs to keep improving with racing,'' Hann said.

"I was confident she'd run well and be hard to beat, but she was still a bit green."

Gloves Are Off made her debut at Bendigo on Bendigo Cup day last spring.

She ran a credible sixth in what proved to be a good form race.

"She shows some early speed, so we wanted to go forward on Saturday,'' Hann said.

"At Bendigo she drew wide, so we went back and that proved to be a very hot race that she started off in.

"She was off the bit the whole way on Saturday. I think in time she'll be a 1400m horse, but we'll slowly step her up.

"Now it's about finding the right races for her."

Hann has a nice crop of young horses in his yard, including the recent urchase of Gloves Are Off's half-brother.

He also has a good opinion of Boy Big, who ran an unlucky fourth on debut at Warracknabeal after being caught three-wide the trip.

Cyclone Louie, who is another daughter of Toronado, makes her debut in a three-year-old fillies maiden at Bendigo on Tuesday.

"It's a hot race and it might be a bit steep for her first-up, but we need to kick her off,'' Hann said.

"This race will tell her where we head with her."