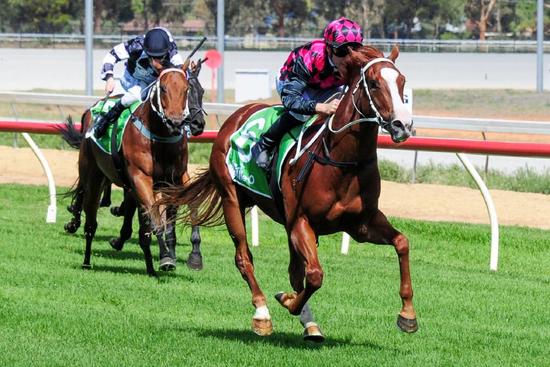 THE ultra-promising three-year-old Latenighttoughguy has had his last start for Bendigo trainer Kym Hann, after being sold to Hong Kong interests.

The well-bred gelding, by Written Tycoon out of Neon Bell, won his only start for Hann, posting an effortless 4.2 length win at Swan Hill on March 20.

His maiden victory followed an equally impressive and painless trial win at Casterton earlier that month.

Hann said it was bittersweet losing the best horse he had trained, but added the offer was one he and connections could simply not refuse.

"It's pretty sad to see him go, he's by far the best horse I've had," said Hann, who has retained a share in the gelding.

"But when they are offering that sort of money, you can't knock it back really."

The deal done, Hann said the focus would now turn to unearthing another potential Latenighttoughguy from his developing team of horses.

"We have got a few nice young ones in the stable, so we will just concentrate on them," he said.

"We've also got a couple of new, tried horses we've bought as well, so we'll see how we go with those."

Asked to speculate on Latenighttoughguy's potential, Hann was convinced the new connections had a definite stakes race winner on their hands.

"I definitely think he's a stakes horse, just how high he goes I'm not sure, they (the new owners and trainer) will soon determine that.

"He's only starting to mature and he's already proven to us, just on raw ability, he's a very professional horse, which is going to take him a long way."

Latenighttoughguy's success at Swan Hill contributed to a season tally of 10 winners for Hann from 64 runners, complemented by 13 placings.

It was a handy return for the young Bendigo trainer in his first season without his former city winners Like To Think So, All About Nicci and Glenrowan Prince.

Plenty of cause for optimism for Hann, two other of his 2019-20 wins also came with first starters, including the highly promising Rogue Star and Big Boy's Girl.

Rogue Star, a three-year-old gelding, is yet to have her second start following an impressive maiden performance at Stawell in February, but is slated to return to work at the end of winter.

Hann sees plenty of upside with the gelding.

"He's still in the paddock, the owners want to race over the drier months, so he will probably be back in next month," Hann said.

"I've got a lot of time for the horse, he can gallop and is pretty smart. I'm looking forward to getting him back, absolutely.

"Big Boy's Girl is going to be a nice horse too, but we're still trying to work her out a bit. She's gone to the paddock for a short spell, but is going to develop into a nice horse.

"She just needs to learn about it a bit more and go through the paces."

Hann credited jockey Jack Martin and his stable staff for their work with Latenighttoughguy.

"We certainly wouldn't have gotten to this point without them all, especially Jack Martin," he said.

"He did all the riding and hard work; I can never thank him enough."