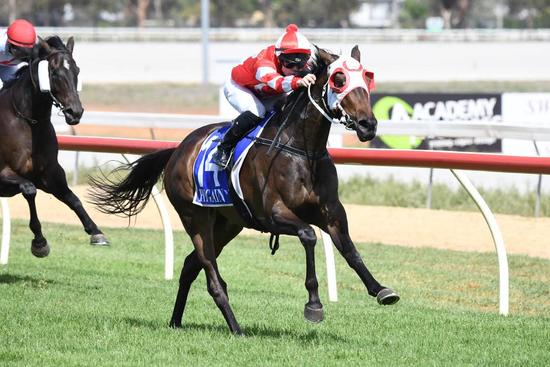 Less than two weeks after the ultra-impressive debutante Latenighttoughguy scored a barnstorming 975m win, Hann was back in the winners' circle following another runaway victory courtesy of Fontein Diamond.

The three-year-old filly had come close to breaking her maiden in three of four previous starts and was not about to let the chance slip again, fighting off a spirited challenge in the straight from Vain Tiger, who weakened to finish fifth, to kick clear and win by 2.5 lengths ahead of Under His Eye and Flying Brolga.

Hann, who has assembled his most promising batch of three and two-year-olds since gaining his trainer's licence, believed the addition of blinkers has resulted in a far more relaxed Fontein Diamond at Swan Hill.

"I put the blinkers on her the other day and we did a bit of work with her, but sometimes these blinkers can work the opposite for horses," he told broadcaster Racing.com

"She's a bit of a hard-going horse, but today she got to the front and I don't think she could quite see the horses behind her and she did switch off and drop her head, whereas in the past she has wanted to get her head up and try and overrace and fight the rider.

"I think today with the blinkers on she couldn't see the horses behind and did switch off that bit more. "

The Turffontein/Octangle filly was confidently ridden by 2kg-claiming apprentice Will Price, who was aboard Fontein Diamond for the first time.

Hann was circumspect when asked if the horse would be better suited over more ground.

"She's no world-beater, but she's got wins in her," he said.

"Blinkers seems to have done the trick for her. If she can settle like that, I have no doubt (she can get over further ground).

"She had a tough 1400m last time (at Kyneton), but I thought back to 1300m with the blinkers on the first time was ideal.

"When they moved this (meeting) from Mildura to Swan Hill, it was the perfect race really.

"We get Will on with 54kg, it was a perfect ride by him. Everything fell into place."

The win secured Price a race-to-race double after his earlier win on the Austy Coffey-trained Tiny Rebel.

Hann finds himself in the midst of a purple patch with four wins from his last 10 starters, dating back to February 18 at Benalla with She's Beneficial.