Hann hopes Rogue can be a star in the making 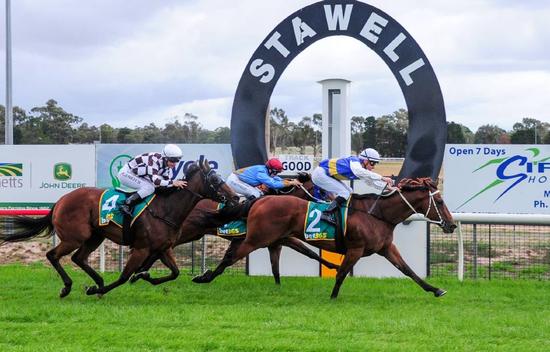 BENDIGO trainer Kym Hann has a big opinion of Rogue Star, and on Wednesday the exciting three-year-old went a good way to validating that judgment.

The nicely-bred gelding lived up to his promise with a stirring win on debut at Stawell over 1100m.

It was a performance that has the young trainer and the horse's owners eagerly looking to the future.

Hann could not be more lavish in his praise of the still maturing youngster.

"I do think he is a very nice horse in the making - I do think he can turn into a city-type three-year-old," he said.

"We will see how he comes through this week and we will try and find a nice race for him.

"There's not too many three-year-old grading races around, but if we could find it would be good.

"He was jumping out of his skin (on Thursday morning), so he's pulled up well.

"He's got a lot of upside to him - he was still very green on Wednesday and still doesn't fully know what he's doing."

Hann has had plenty of handy horses in his care since taking up his trainer's licence about a decade ago, among them, the city winners Like To Think So, All About Nicci and Glenrowan Prince.

In terms of potential, the trainer declared Rogue Star as arguably the most capable galloper in the stable at the present moment.

"We've galloped him with everything we've got here at the stable and nothing can stick with him," Hann said.

Jockey Jack Martin, who picked up the winning ride and also partnered the three-year-old in a trial last week, was equally excited by Rogue Star's potential.

"He's still very green and immature ... even when he got to the lead and ran away from them he was still pricking his ears and doing a few things wrong," he told Racing.com

"He's still very raw, which shows he has a great upside."

Hann narrowly missed notching a double, with another of his exciting youngsters, third-starter Fontein Diamond, relegated to second behind the Ciaron Maher and David Eustace-trained Vapid in a 1300m maiden.

He believed a breakthrough win with the three-year-old filly would come sooner rather than later.

A good week for the Bendigo trainer had its origins at Benalla on Tuesday following a win with She's Beneficial.

The six-year-old mare was second up from a lengthy spell for his new owners and showed a ton of character and courage to mow down Bezazzalled and the pacemaker Sasayuri late in the race to record her fifth career win from 28 starts, with Zac Spain in the saddle.

Three of She's Beneficial's wins, including her lone metropolitan success at Morphettville in 2018, have come when second-up.

Her next start will be in the $150,000 final of the Grand Handicap series at Flemington next month.

Hann said the mare had been a cheap but more than handy pick-up for her new owners.

"The previous owners put her up for sale and I had no intention of buying the horse back whatsoever," he explained.

"But he was just going that cheap that I rang around some of my owners and she ended up being bought back for $5000.