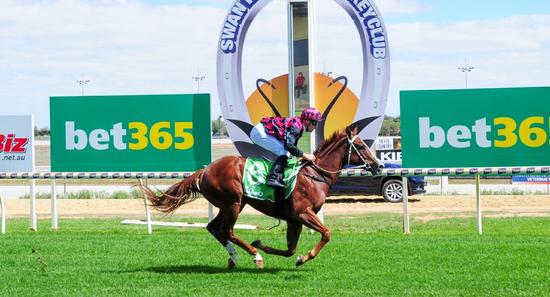 IT'S tough and uncertain times for all in the horse racing industry in the wake of the coronavirus, but if there is a silver lining for Bendigo trainer Kym Hann, it's his exciting crop of youngsters.

One month on from the impressive debut performance of Rogue Star at Stawell, Hann unveiled another superb three-year-old at Swan Hill last Friday in Latenighttoughguy.

The Written Tycoon gelding overcame a tardy start and a tough run to trounce his nine rivals in a 975m maiden plate.

Nearly five lengths separated Latenighttoughguy and the second placegetter Tiny Rebel, despite the Hann-trained galloper being eased down in the run to the line by Jack Martin.

Hann hopes a brilliant debut is a welcome sign of better things to come for the smart youngster and also the stable.

"I was a bit nervous when he missed the start and jumped last, but his class overcame the rest of them and he got the job done," Hann said.

"The other one is still yet to race, which is Big Boy's Girl. She will be back shortly, she's just had a few niggly things.

"There's three good three-year-olds there and we've got some good two-year-olds that are yet to race as well."

Hann revealed Latenighttoughguy had attracted the attention of Hong Kong interests and could be destined for a career outside of Australia.

"We had him sold prior to his trial (win), but it went pear-shaped. There is a chance he will be moved on very quickly," he said.

"If that doesn't eventuate he will go to Caulfield on April 4, if they are still racing.

"We did have a plan to take him to Adelaide, but that's all up in the air now - we probably won't even be able to get him across the border."

Meanwhile, Rogue Star has been spelled following a barrier incident, which led to his late scratching at Echuca earlier this month.

The Wanted/Majestic Cheval gelding had been set for a tilt at the $150,000 Bendigo Guineas (1400m) this Saturday, but his absence will leave Hann without a runner on Golden Mile race day.

Hann contributed to a trio of wins for Bendigo trainers at Swan Hill.

The five-year-old gelding went almost 12 months and 13 starts without a win, but now has two-in-a-row for Kennedy following wins at Stawell and Swan Hill, both over 2000m or further.