Back-to-back Adelaide wins with All About Nicci 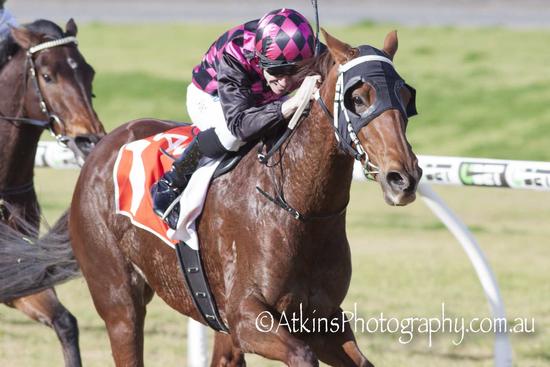 FRESH from his trio of wins in the Bendigo Trainers’ Association horse of the year awards, Kym Hann’s 2018-19 season campaign is off to a flying start.

Hann notched his first winner of the new season following in-form mare All About Nicci’s 1000m victory at Morphettville on Saturday.

It was the 30-year-old’s first trip back to the racetrack in Adelaide since he secured his first city double with the same horse and the former Gus Philpot-trained She’s Beneficial late last month.

It continued a strong association between Hann and jockey John Allen, who has ridden three winners for the Bendigo trainer in just four starts.

Hann’s Saturday got even better when he took out the leading trainer and top strike-rate awards at the Bendigo Horse of the Year awards.

The humble trainer was quick to lavish praise on his stable staff and owners for his award wins and that of All About Nicci, who has now won six of her 20 starts for Hann for nearly $120,000 in prize money.

“It’s the support of the owners and my staff that makes things like this possible. It was a big day all round,” he said.

“I drove the horse to Adelaide (All About Nicci) to Thursday night and didn’t get back to Bendigo until Saturday, but it was all worth it.”

Hann was back on the road to South Australia on Monday to collect the horse, with the trainer still considering where her next run might be.

The mare’s last three starts have produced two wins at Morphettville and a second on her home track in Bendigo in early July.

Hann said Glenrowan Prince had returned to training, but with no program as yet mapped out for the resilient seven-year-old gelding.

“He’s becoming a bit harder to place now that his rating is so high, but we will find something for him,” he said.

“It was pretty special winning another horse of the year (award) with him.

“He’s been a good horse for us, but we’ve been through a lot of headaches with him, which just shows how good he could have been had he not broken down.”

Hann believed the horse of the year award could have gone either way between Glenrowan Prince and the Shaun Dwyer trained youngster Miss Leonidas, who won the award for best three-year-old.

He believed the talented Miss Leonidas, who has won three of her seven starts, including a six-length victory at Moonee Valley in June, was destined to win a horse of the year title sooner rather than later.

Only weeks removed from a city double and with another city win in his account, Hann was looking forward to another prosperous season in his blossoming, but still young training career.

“I have a lot of young horses here I’ll be relying on; a few of the older ones are getting to the end of their tether,” he said.

“I just have to hope some of these young ones step up.

“We have about eight unraced three-year-olds, six two-year-olds, who are unraced, and a few older maidens who are as bit of an unknown.”