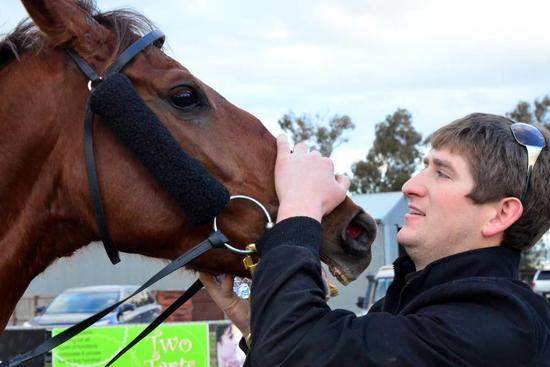 BENDIGO trainer Kym Hann will always remember the February 2017 day he prepared his first city winner as one of his finest in his training career.

The 30-year-old concedes it’s a close call, but his effort at Morphettville on Saturday might well have been a new high point.

Hann, who took up his trainer’s licence in 2008, notched his first metropolitan double with a pair of his stable’s favourite gallopers.

Hann, who has trained 13 winners this season, could not hide his delight when asked to rate the double against his maiden city victory.

“It’s definitely up there; that was huge,” he said.

Hann believed both horses had shown signs of good things to come at their previous starts at Bendigo on July 6, when She’s Beneficial finished a good fourth from a wide barrier in the Donna Philpot Memorial Handicap (1100m) and All About Nicci was fourth over 1000m.

“They both showed a lot at Bendigo; I came in pretty confident, but it’s always hard in racing, there’s plenty that can go wrong,” he said.

“But it was a huge result for us.

“I’m not sure what’s next, we’ll just let the dust settle and have a look at the calendar; there’s nothing pencilled in.”

Hann rated All About Nicci, who now has five wins from 19 starts as a genuine 1000-1100m galloper, but felt She’s Beneficial was capable of rising beyond Saturday’s distance of 1400m.

Both horses were ridden by John Allen, who finished the day with a treble.

Saturday’s race was She’s Beneficial’s second start for Hann after he took over the training duties from Gus Philpot.

The double continued a prosperous season for Hann, who has four wins from his past 11 starts alongside a string of minor placings.

“We had a great week; we took Like To Think So to Sandown on Wednesday and got a third,” he said.

“I have to thank all the staff for our success, they are a big part of what happens – they’ve been brilliant.

“He (Like To Think So) just had to do a bit too much work; he got to the front and overraced a bit.

“He’ll win one in town soon – he just needs to draw a good gate and things will go well for him.”