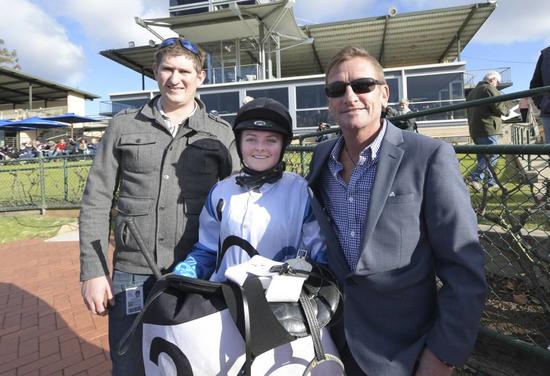 A MARE once trained by Gus Philpot has come agonisingly close to completing a fairytale tribute to the Bendigo trainer’s late wife.

Race six at Friday’s Bendigo Jockey Club meeting was the Donna Philpot Memorial Handicap, named in honour of the popular racing identity, who was tragically killed in a track-work fall at the course in June 2017.

A large gathering of family, friends, owners and acquaintances gathered at the White Hills racecourse to cheer on the former Gus Philpot-trained She’s Beneficial in the 1100m feature.

The four-year-old, ridden by Gus and Donna’s daughter Jess Philpot and now trained by Bendigo’s Kym Hann, was always up against it after drawing the widest barrier and being forced to race at the outside of the field for much of the race.

A winner at three of her previous 12 career starts, She’s Beneficial ran a stout race, but could only manage a close-up fourth behind the Jason Warren-trained Miss Toorak Flyer.

While it was not the fairytale everyone in racing had yearned for, those connected with the family were proud to just be involved.

“It’s really exciting, but also very hard at the same time – I’ve never been in this big of a race for our family,” she said.

“I know it’s just a Rising Star race, but the name of the race means a lot to our family.

“(The past 12 months) has been hard, we’ve all just been trying to keep busy and do our job. The Bendigo racing community has been amazing.”

Typifying that support, Jess revealed she had been briefed pre-race on the horse by fellow jockey John Keating, who partnered She’s Beneficial to a pair of wins late last year, while still being trained by Gus.

While Gus is taking a break from training, Donna continues to be listed as one of the owners of She’s Beneficial.

The mare was having her first start for Hann, who said a win would have meant the world to the family, in particular Jess.

In an encouraging day for the Hann stable, the young trainer emerged with a winner in the day’s final event, with Like to Think So making it two wins in a row following the gelding’s success at Mildura last month.

He was desperately unlucky not to finish with two winners, with five-year-old mare All About Nicci beaten by a whisker in the day’ seventh event over 1000m.