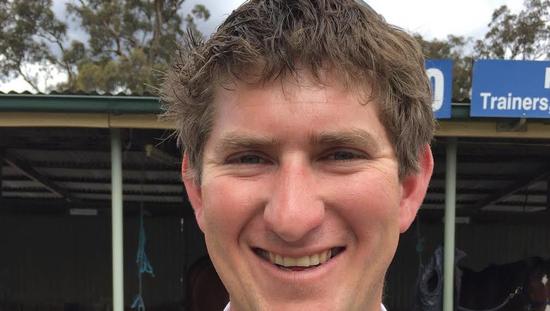 TRAINER Kym Hann is counting down the days until his Bendigo Horse of the Year winner Glenrowan Prince makes a return to the racetrack.

The six-year-old gelding has not raced since supplying Hann with his first ever city winner in February this year.

But that did not stop Glenrowan Prince from capturing the horse of the year title at Saturday night’s awards function at the Bendigo Jockey Club.

It was a prosperous season, with Glenrowan Prince winning four of his nine races, including the John Moule Handicap at Caulfield and Italian Plate at Tatura.

The gelding’s season started as it ended, with a win at Mornington in September in a benchmark 70.

He eventually underwent surgery to remove a chip in his fetlock following his Caulfield win and has been sidelined ever since.

But an elated Hann said his stable star was back from the paddock and nearing a return to racing.

“He’s probably about four-weeks away from a jump-out; he’s got a few issues so we’ll take him along steadily,” he said.

“There are no real plans at the moment, but the horse has come back to the stable in good condition.”

The accolades did not end there for both horse and trainer.

Glenrowan Prince claimed the mantle as sprinter of the year, while Hann was named the ATA strike rate trainer of the year, with a winning percentage of 22 per cent (14 winners from 61 starters).

Hann is readying for a busy weekend, with a runner at Mildura on Friday, three at Narrandera on Saturday, and another at Echuca on Monday.

Among those making the trip across the border will be Narrandera Cup (1400m) hopeful Inner Strength, who is coming off back-to-back third placings at Swan Hill in the past month.

Hann said Glenrowan Prince had certainly provided plenty of thrills for connections, with his win at Caulfield also being the first city success for many of the galloper’s owners.

For the second consecutive year, Fliedner won the trainer’s premiership with 17 winners, while his six-year-old gelding In Fairness was named middle distance horse of the year.

The Dwyer-trained Savaju was crowned the three-year-old horse of the year following a trio of wins on her home track and some competitive city performances.

Star Hills, from the Allen Browell stable, was the two-year-old of the year, while the Rod Symons-trained Savannah Moon captured the stayer of the year title.

Highlights of the mare’s season included a win at Swan Hill in June, a second placing at Flemington, and a third in the $80,000 Pinker Pinker Plate at Cranbourne last October.

The Brian Gentle-trained Nine Mile Sniper was recognised for his efforts on the picnic circuit.